After collecting survey results from 42 retail and foodservice restaurants in Boulder, with respondents skewed toward downtown businesses, city-hired Gruen Gruen + Associates examined the sales data and costs for each business accrues to occupy its space.

The consultant found commercial landlords’ practice of passing along costs like property taxes, building insurance and maintenance is having an impact.

“Attraction and retention of smaller, independent merchants is likely to be become more challenging under status-quo,” 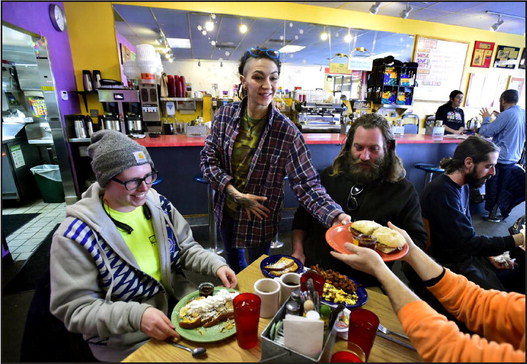 Server Kaylie Gormley brings a lunch order to Cody Hollenbeck, right, Seth Wilkinson, center, and Sara Shirley at the Walnut Cafe on Friday afternoon in Boulder. Dana Derichsweiler, who owns the restaurant and is not pictured, said the boom in housing development in the Boulder Junction area, near 30th and Pearl Streets, has helped her business with extra foot traffic. A December report shows independent Boulder retailers and restaurateurs like Walnut Cafe are facing challenging real estate costs in a local business environment likely to continue squeezing them. 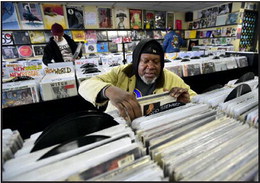 C. Howard Hall, of Denver, sorts through records while shopping at Bart’s Record Shop on Friday afternoon in Boulder. Some independent retailers in Boulder are facing high real estate costs as compared to their sales.

the Gruen report stated. “Most merchants responding to the survey anticipate that costs will continue to increase faster than sales and for at least one-third of them, real estate occupancy and payroll costs are already a significant challenge to viable operations.”

Payroll costs may be set to increase for some businesses, too, with City Council at its retreat last month placing emphasis on exploring a minimum wage increase. Council is meeting with the Boulder County Commissioners on Monday with plans for a potential regional minimum wage hike to be discussed.

All but one of the 40 respondents that indicated their current lease arrangements reported paying rent on a “triple net” basis, meaning real estate taxes, insurance and maintenance are taken care of by the tenant.

With 35 respondents to the survey answering questions about their real estate costs and annual sales, the study found a majority pay more than the suggested 10% of sales to occupy their spaces. About 29% of the respondents reported occupancy costs of at least 15% of sales, with another 26% reporting such costs of between 10% and 15% of sales. The remainder of respondents reported keeping costs below the 10% benchmark.

The report also studied the Boulder Valley Regional Center, which coincides with the shopping area along 28th and 29th streets between Pearl Street and Arapahoe Avenue, but it did not fit this trend with sales and real estate cost comparisons.

The study noted those sales per square foot benchmarks for retailers and restaurants are not precise because they do not account for building space that was unoccupied during the reference period. But it still concluded “that future tenants absorbing available retail spaces in these locations would need to generate sales well above average to achieve an occupancy cost expense ratio close to 10% of sales absent considerable rent concessions.”

High housing costs in Boulder aren’t helping the situation either, the study noted, driving the need to import labor and thus contributing to perceived traffic congestion, public transit limitations, and employee parking shortages in commercial areas. Together, those factors exacerbate the sense that real estate costs are constraining doing business in Boulder, the study said.

But the proliferation of housing development in the Boulder Junction area, near 30th and Pearl Streets, has helped out nearby retailer Dana Derichsweiler, owner of the Walnut Cafe eatery that has been in the area since 1983.

With multi-family housing comes more foot and bike traffic to businesses, Derichsweiler said, as customers stumbling upon restaurants and retailers without actively seeking out a specific store provide a boon compared to years past.

“The denser we get, definitely the more business, retail and restaurants are going to be able to do,” she said. “There are just more residents. Especially when you look at that corridor, 30th and Pearl, it’s just building, building, building. … For so long we were a destination point, for so many years it’s not like you were driving by and walking by or riding your bike.”

Councilman Mark Wallach pointed to the other side of the coin. Further development and increased housing density surrounding commercial space can add property value in an area, which often leads to landlords raising rents on the business tenants in ensuing leases, he said.

“You’ll see the density, but not the benefit of it (for businesses),” Wallach said.

The study found nearby retail and food-service business environments in cities nearby Boulder with much lower costs, with commercial space rents in downtown Fort Collins averaging $32 per square foot annually, 50% of asking rates for similarly sized spaces in downtown Boulder.

Newly built commercial spaces in mixed-use developments in Lafayette and Louisville have asking base rents of $25 to $27, with $11 per square foot in estimated expenses, the study said.

“These are new construction, top of the market rents for Louisville and Lafayette that are roughly equivalent to the gross asking rents for small available, and much older, spaces in (University Hill) and Basemar,” the study said.

Wallach said businesses are often OK with paying a premium to access the Boulder market, but acknowledged that businesses could look to locate elsewhere if prices continue to rise.

The councilman does not believe attempts to regulate commercial leasing would be fruitful on the city’s part, citing the state prohibition on local government rent control and the difficulty in preventing landlords from passing on costs to business tenants, through increasing base rents if maintenance or property tax costs couldn’t be transferred, for example.

“I’m very concerned with occupancy costs, but we have no ability to regulate it on the landlord’s end,” Wallach said. “I’m concerned with overreaching landlords, too.” He supports as one potential solution limiting the inprogress “community benefits” program, by which property developers can receive exemptions to city building height, density and intensity limits by providing certain public needs, like affordable housing.

Instead of expanding the program to include a longer list of options for developers to obtain the exemptions, such as space for public art, Wallach believes they should only be granted leniency when affordable housing or affordable commercial space is provided.

Click here to see this page in the eEdition: